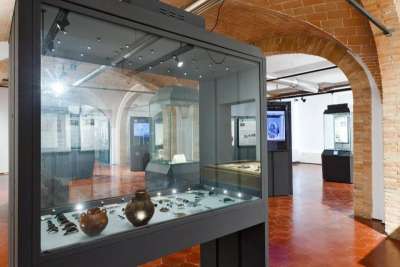 The Municipal Archaeological Museum of Cecina in its latest exhibition, built in 2003, represents a complete and accurate exhibition of the ancient history and archeology of the Lower Val di Cecina, from the remote settlements on the coast of the lower Paleolithic to the last phase of the large villas Roman who with their funds occupied all the surrounding territory.

The Museum was born, or rather, it would be appropriate to say reborn, from the desire to enrich the historical awareness of a territory rich in testimonies of great value, the enhancement of which passes through a profound renewal and reinvigoration of the cultural proposal offered to citizens and in particular to young people, also constituting an added value for occasional visitors and tourists.

The exhibition itinerary follows the human traces of the territory according to a chronological and topographical criterion that takes into account the deep bond that unites the Bassa Val di Cecina to the city of Volterra.

The first two rooms are dedicated to prehistory and the Iron Age.

The two subsequent rooms constitute the most interesting nucleus of the whole exhibition, in fact they contain the entire set of tomb A of the necropolis of Casa Nocera in Casale Marittimo, with the bronze banquet service, the bronze defense and offensive weapons. and iron and the rich personal furnishings in bronze, gold and silver, which displace an extraordinary complex of materials unique in terms of vastness in the whole of northern Etruria.

The path continues with the exhibition of the many testimonies of the orientalizing age of the area, with the aristocratic settlement of Casalvecchio and the whole series of chamber tombs from Casale, Casaglia, La Ghinchia, and L’Aia Vecchia, with their grave goods rich in Etruscan and Greek materials, an explicit symbol of a complex occupation, by great aristocratic families, of a coastal territory and the immediate hinterland, already fully inserted in the maritime trade routes that connected the entire western Mediterranean.

In the passage to the classical age, the itinerary offers a collection of marble funerary stones, partly collected from private collections and exhibited for the first time, which link the local craftsmanship of this precious material to the experiences of Volterra, Pisa and the area beyond the Apennines. Etruscan.

The following rooms are dedicated to the Hellenistic age with materials from the numerous settlements that develop on the heights, from Casalvecchio to Belora, from which a beautiful golden crown comes, and to the reconstruction of the largest tomb in the necropolis of the Badia a Volterra , to underline once again the indelible link with the city.

The last rooms offer a part of Roman tombs, and some evidence from the Roman villas of San Vincenzino and Casale Marittimo as well as a suggestive setting up of part of the transport amphorae found at the mouth of the Cecina river and in the amphoric deposit of “Mazzanta “.

The exhibition closes with the most significant part of the archaeological collection, rich in beautiful finds, collected several times by the Municipality of Cecina.

A tactile path has also recently been inaugurated: a journey through the reproductions of the most significant works exhibited at the museum that will lead into the past in a very particular way and also accessible to blind people. The “Touch our past” project was carried out in collaboration with the CNR of Pisa, the Italian Blind Union (Livorno section), the Fermi high school in Cecina and Terracotte Bitossi.

“A tactile path like this – underlined the director of the museum Stefano Genovesi – has a double value: on the one hand it will allow blind people to acquire otherwise impossible information, on the other it will also serve to give greater strength to the story for everyone. “.

INFO ON TIMETABLES AND TICKETS

The museum is located in La Cinquantina, inside the historic Villa Guerrazzi