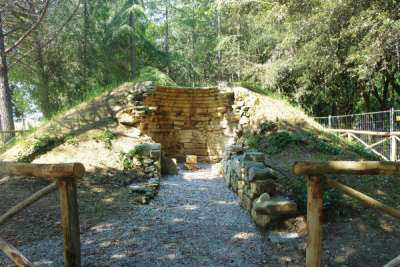 The chamber tomb of Casaglia (Municipality of Montecatini Val di Cecina), was found on the Casaglia estate in February 1932.

Dated to the beginning of the sixth century. B.C. the tomb is made up of a dromos, a long access corridor that led to a large circular chamber with a central pillar in which the cinerary urns were placed.

In 1962 it was decided to dismantle the tomb from its original place and move it to the courtyard of the Antiquarium of Cecina to make it accessible to the public; the reconstruction work was completed in 1965.

In 2012 the tomb was moved to the Park of Villa Guerrazzi (Fattoria della Cinquantina) where the Archaeological Museum is set up.

The tholos tomb of Casaglia is one of the most important testimonies of the presence of Etruscan aristocratic families in the territory of the Lower Val di Cecina.