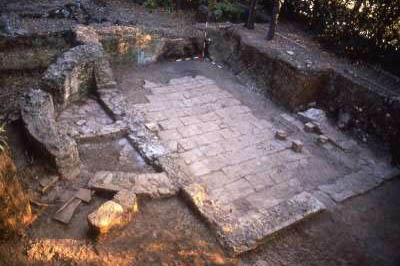 In a panoramic position, near the sea in San Vincenzino, the remains of a grandiose Roman Villa of the imperial age have been found.

The excavations carried out on the archaeological site (known since 1700) have made it possible to reconstruct the characteristics of the complex, which had a long period of life (1st century BC – 5th century AD) and whose history appears to be divided into different construction phases and subsequent modifications of use.

The traditional attribution of the villa is to Consul Albino Cecina and after many years this attribution has been definitively confirmed in the recent publication of Dr. Fulvia Donati of the Department of Archeology of the University of Pisa entitled: “The Roman Villa of San Vincenzino a Chickpeas flour pie”.

Erected in different phases, the building is constituted as an urban villa around an atrium and peristyle complete with a spa system and with a part dedicated to production facilities and the storage of products. Thanks to a project by the Municipal Administration and the collaboration of the Archaeological Museum and the Isis Polo Cattaneo, a 3D video was created that reconstructs the Roman Villa as it was in the various eras.

Some of the structures unearthed in the excavations that followed on the site of the Villa, which was particularly extensive and rich, are currently protected and can be visited, particularly suggestive is the visit to the large underground cistern completely intact and open to visitors, with an elongated rectangular plan with a vaulted ceiling. barrel that guaranteed a considerable water supply to the whole villa.

The excavations of the villa since 1983 have been supervised by the Department of Archeology of the University of Pisa.

Currently the site is equipped as an archaeological park, open to the public and managed by an Ati of cooperatives, Il Cosmo, itinera and Capitolium, which takes care in particular of its guided tours, promotion and educational activities (the initiatives are in the Events section of the Municipality or the site of the archaeological museum).

In a room on the ground floor of the Villa Rossa (accessible by a ramp for people with walking difficulties) it is also possible to visit an exhibition of reproductions of musical instruments used in ancient Rome, curated by Maestro Francesco Landucci. On the occasion of the guided tours, access is also provided to the deposit that collects the finds found in the area and to the archaeologist’s room, with didactic panels and tools of the trade.

In summer, in particular, the archaeological park hosts workshops for children and concerts organized by the Sarabanda music school.